Far north in the remote East Greenland stands research station Zackenberg. For more than twenty years, it has provided research facilities for hundreds of scientists investigating the Arctic.

Zackenberg research station is run by Aarhus University, and the work carried out at the station has resulted in numerous scientific publications. Now the station – or actually the researchers – appears in two new Greenlandic stamps.

"I thought it was logical to focus on the researchers and their patient work with peculiar measuring instruments. Their curiosity and wonder is worth gold for me and all of us", says Naja Abelsen, the Greenlandic artist who pictured the stamps.

There are two stamps, one presenting researchers engaged in the five key areas which form the core of the research and monitoring programme that takes place on Zackenberg. The other features a lemming surrounded by four predators which are totally dependent on lemming as prey, namely Arctic fox, snowy owl, long-tailed skua and stoat. 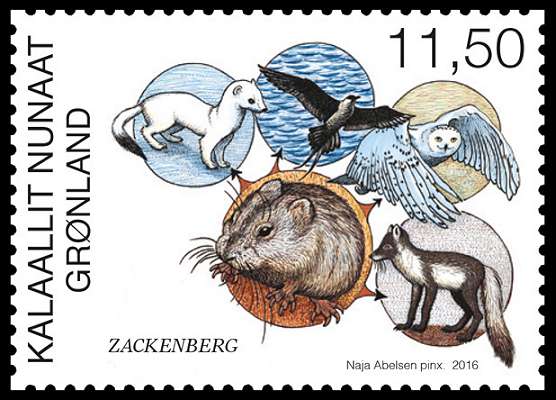